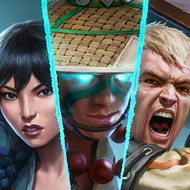 NEKKI
Games, Role Playing
Android 4.2 +
Version: 0.3.3
$0
Shadow Fight Arena - fighting game, the creators of which decided to look at the popular genre from a new perspective, so in addition to classic horizontal battles with dozens of possible attacks and all kinds of combos, you will find a well-developed plot in the Asian style, an impressive arsenal of edged weapons, additional magic bonuses, a system of pumping and character development. It is also worth noting that this project was created specifically for mobile platforms as a result of bright graphics sustained in the best traditions of the genre, not demanding on the capabilities of the device, and the controls are designed for touch screens.
Additional Information from Google Play:
Updated August 16, 2020
Size 94.6Mb + 407.4Mb
Installs 1 000+
Rated for 12+ years

Before playing, you need to download and run the Canada VPN!