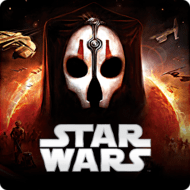 Aspyr Media, Inc.
Games, Adventure
Android 6.0 +
Version: 2.0.2
$0
STAR WARS: KOTOR II - the developers of this game invite you to become in place with millions of other players from around the world, and give a worthy rebuff to the army of the Empire. Arm yourself with weapons and become on the defense, pump your game character, endowing him with new skills and unique abilities. The game will appeal not only to all fans of Star Wars, but also to fans of hot and furious battles, in which you expect a long story and a large number of quests and side quests.
Additional Information from Google Play:
Updated March 6, 2021
Size 21.8Mb + 2358.8Mb
Installs 10 000+
Rated for 12+ years