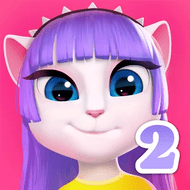 Outfit7 Limited
Games, Casual
Android 5.0 +
Version: 1.0.2.4
$0
My Talking Angela 2 (MOD, Unlimited Money) - sequel to the cult game from Outfit7 Limited! Like the original, you are waiting for the game genre, which is quite widely represented on mobile devices, while most of the games are made in the same style. However, there are also quite interesting projects, such as My Talking Angela 2 mod apk virtual pet, this game in which you will be able to get your own virtual cat. As in most representatives of the genre, you will have to take care of fluffy creature, feed him, treat and dress him. But the developers tried to vary the gameplay, so you can go to the tropical island and together with your friend to explore the world, or play different mini-games and perform various tasks.
Additional Information from Google Play:
Updated March 31, 2021
Size 131.5Mb
Installs 100 000+
Rated for 3+ years