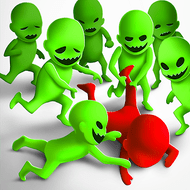 HOMA GAMES
Games, Action
Android 5.0 +
Version: 1.7
$0
Z Escape (MOD, Unlimited Money) - the story is set in a fictional world, a world where everything is ruled by a secret organization, but the official government does not want to give up power. As a consequence, a team was created to exterminate the zombies, and you are one of its soldiers. Despite the fact that the idea of the story and the gameplay is not new, the game still deserves attention, a huge selection of weapons, development system, various missions and a huge choice of locations in combination with detailed graphics will give a lot of advantages to the shooter.
Additional Information from Google Play:
Updated March 31, 2021
Size 54.1Mb
Installs 1 000 000+
Rated for 12+ years