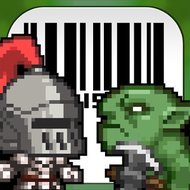 Magic Cube
Games, Simulations
Android 4.2 +
Version: 1.77
$0
Barcode Knight - the world consists of magical powers, was peaceful and beautiful, but the power of evil slammed the world, the area has become empty and vain, and began to overrun with monsters. Barcodians which livelihoods in danger of staying was swept out to hunt monsters for living Barcode Knight (MOD, unlimited money). And later in Wotan beautiful day, they found a portal to the dungeon and castle built circle portal.
Barcode Knight is one of the town probably suit the way.
Additional Information from Google Play:
Updated 04.01.2016
Size 36.2Mb
Installs 5 000–10 000
Rated for 3+ years