AN1.com    →    News    →    Android    →    Two new Huawei Honor on Snapdragon 615
Huawei is going to introduce two new smartphones under the brand Honor: 5A and 5A Plus. The older model has appeared in the benchmark GFXBench a complete list of specifications. It is known that the device is running Android 6.0 with EMUI shell will receive a 5.5-inch HD-display, eight-chipset Snapdragon 615 1.5 GHz, 2 GB of "RAM", 16 GB of internal memory, 12-megapixel camera with recording capability Full HD-video, and battery capacity of 3000 mAh. Specifications Huawei Honor 5A were published even earlier, when the novelty has passed certification in TENAA. 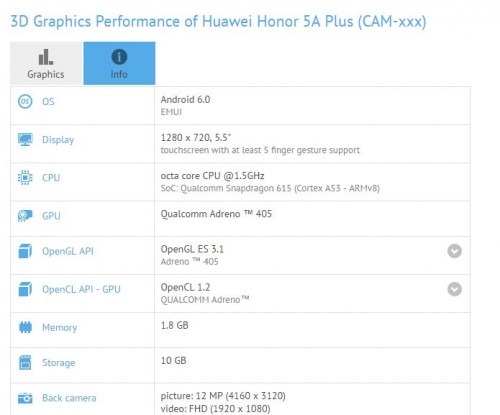 Low-end model with a 5-inch screen and runs on the Snapdragon 615, but was reduced to 1.3 GHz clock speed. It is also known that the battery capacity of the device is 2200 mAh.

Nevertheless, between the information in the benchmark and TENAA there are some inconsistencies. For example, in TENAA argue that devices installed 13-megapixel camera module, while in GFXBench declared a 12-megapixel camera. This information can be confirmed on June 12, Huawei presentation.
Next News
Specifications OnePlus 3