AN1.com    →    News    →    Novelty    →    Smartphones with Snapdragon 845 became known
In the social network Weibo appeared information about the phones in which Snapdragon 845 will be used. One of the users even provided a schedule when this or that smartphone on the basis of this processor will be released. In particular, according to these data, Samsung Galaxy S9 will be introduced in February, Xiaomi Mi7 in April, Sony Xperia XZ Pro-A in June, Xiaomi Mi Mix 3 in September, Moto Z in November and so on. To believe or not this information is a private matter for everyone, but at least this list may well be true. 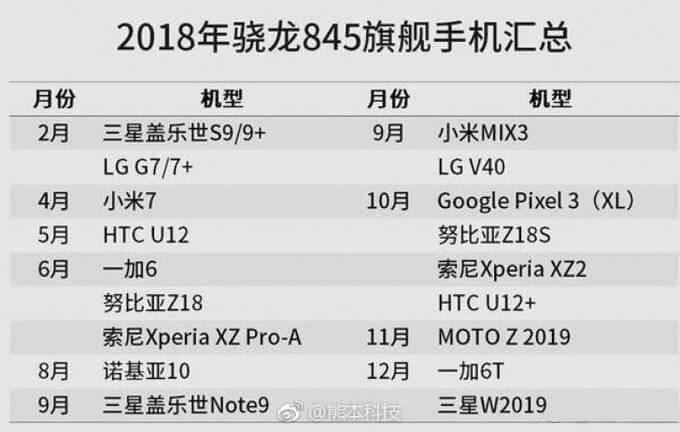 Recall that the flagship processor will have at least a 25 percent performance advantage over the previous version. The level of energy consumption has also been reduced by almost a third. The main feature of the platform is support for virtual and augmented reality, as well as the ability to write videos in 4K format at a frequency of 60 FPS.
Next News
New from LG - stretch smartphone

Calculated the cost of Galaxy S9