AN1.com    →    News    →    Novelty    →    Vivo NEX 2 will become full screen
In the middle of December last year, Vivo impressed everyone by presenting a new brainchild - Vivo NEX. Despite the fantastic performance, the flagship in the first place impressed with almost no frames. So, with a half centimeter frame at the bottom, the indentations on the sides were less than 2 millimeters, and at the top - only 2.16 mm. Such a thin frame was not yet one of the smartphones. 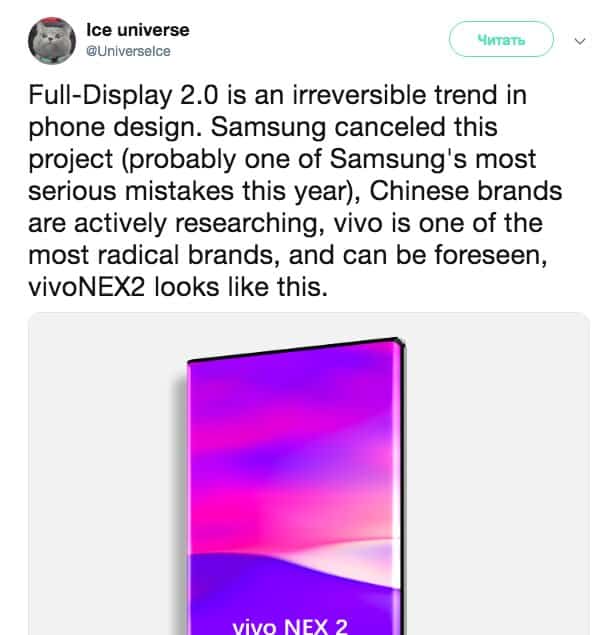 Recently it became known that the manufacturer is working on a second generation of the flagship device. According to Ice Universe, the Vivo NEX 2 will become an absolutely frameless device. The insider published a possible design of the smartphone, which received a screen curved around the edges.
At the moment, there is no information about the approximate appearance of the smartphone, but knowing the fanatical love of Vivo for experiments and frameless designs, its output is a matter of time.
Next News
Xiaomi introduced an exclusive line of smartphones

Galaxy S10 Plus surfaced on video a week before the announcement

The first rumors about the Galaxy Note 10