AN1.com    →    News    →    Android    →    Android Oreo is installed on every ninth smartphone
Every month, Google publishes statistics on the distribution of its Android operating system, which is very convenient for tracking the popularity of a particular version of the market. According to the figures, the latest version of the "green robot" Oreo shows a steady growth in demand among the owners of devices based on Android. Now, every ninth user chooses the eighth version. The percentages of other versions are gradually being reduced.
Like last month, the most popular version was Nougat, which is installed on every third gadget. The least popular among users, as before, are obsolete versions of Gingerbread and Ice Cream Sandwich, in total they have only half the percentage of distribution. 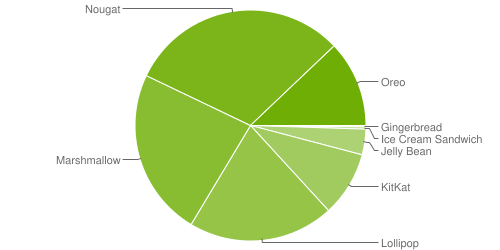 The next month is expected to release the ninth version of the Android P system, but it can be assumed that the report for August will again lead Nougat and almost certainly Oreo.
Next News
The game \"Blade Runner 2049\" went to the Play Market in test mode

Three critical vulnerabilities in the Android

The Android version of Battlefield has appeared on Google Play

Google will introduce the new possibility of updates